In response to the coronavirus COVID-19 pandemic we regret that Unicorn School has been advised to close.

We will keep parents updated accordingly.

What a week for Unicorn hockey! 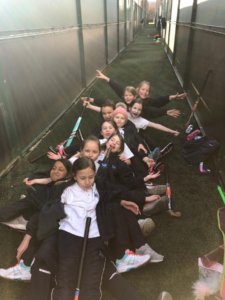 Our Year 4 girls competed in a hockey festival organised and run by Prospect House. The brief was simple: Think about the skills you have been practising, enjoy yourselves and if you win a game then that is a bonus. What we were not expecting, was for the girls to play so well that they won all three games! Every girl played with focus, commitment and worked well as a team; the level of play was high and enjoyable to watch – huge congratulations girls.

Our Year 5 boys were also involved in a hockey festival this week. Motivated to win, all the boys were keen to showcase their skills. Before the games began we talked about our aims, formulated a plan and decided on a formation. The tactics were very simple, keep them out of our ‘D’ and move the ball quickly into their half. Not only did we not concede a goal, but the ball never entered our ‘D’ which meant they could not score. We won three of the four games and drew the last. Considering we have only had a few hockey sessions, all the boys looked like seasoned players – well done to all the boys too.

Gold with distinction for our Unicorn Singers … and more!

I would like to formally thank all the children in Year 6, their parents and the staff who teach them. …

The week before half term we were inundated with birds during our Arts and Culture Week; Birds of every description …

Unicorn School raises an amazing £1,646 for the Australian Red Cross

On Monday we held our own Unicorn Australia Day, raising money for the Australian Red Cross in aid of the …