In response to the coronavirus COVID-19 pandemic we regret that Unicorn School has been advised to close.

We will keep parents updated accordingly.

Year 6s extracting DNA from strawberries – just one of the amazing activities during STEM week!

Unicorn’s STEM Week (including extracting DNA from strawberries!)
Extracting DNA from strawberries isn’t something I thought I would ever witness at Unicorn! This, alongside how television works, how to hear a heartbeat, pharmaceuticals, being a doctor, a vet, making catapults, were just some of the many amazing talks/workshops given by parents and visitors last week during STEM week. It was one of those weeks when the school was really buzzing and I know many of the children will have had their future career choices influenced by it. On top all that, Year 6 had their trip to the Houses of Parliament and were very grateful to Zac Goldsmith for giving up time for a Q & A session – I believe the children were wonderfully direct with their questions, which ranged from the environment to Brexit! 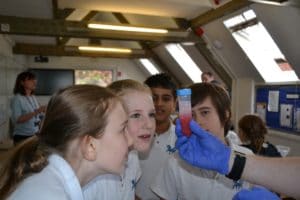 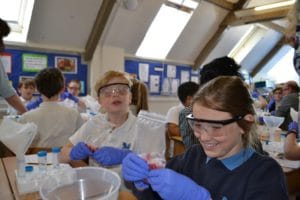 Environment Week
We launch our environment initiatives the week beginning 20 May, the same week when we will be encouraging as many people as possible to walk their children to school. We are planning an ambitious eco project, which will not only make significant strides towards reducing our carbon footprint, but also educate the children further on environmental issues and what is necessary to protect our planet.

How friendships blossom at Unicorn
In assembly last Friday I introduced to the school all those children who have specific responsibilities for the term, our Head Girl and Head Boy, Captains of Sport, School Council, Eco Warriors and of course the ‘Smiley People’. We should all feel very proud when, one after the other, all the school council said that their favourite thing about Unicorn is their friendships and how friendly the staff and parents are to them. After assembly, I reflected that although it appeared many of the children seemed to be saying the same thing, they were all being genuine and what more can you ask for than a cross section of the school all saying how happy they are here due to the friendly environment.

Music Recitals
It does seem like a long time ago, but it was only last week when we had another of our wonderful tea time music recitals; children performing with such confidence and enjoyment whether they had only just taken up a musical instrument or had been playing for some time. Unicorn children have such confidence to perform and they know that they will be appreciated by all the listeners. The spirit of Unicorn really is on show.

From Cornwall to Cumbria
This week our Year 5s and Year 6s are away on their trips to Cornwall and Cumbria respectively. These are amazing weeks and for some children they really are life changing as they dig deep into their reserves and unearth skills and resilience that perhaps they didn’t know they had. Don’t worry about any pre-trip trepidation, this is natural, they always have a wonderful time and pack a multitude of experiences into a short week.

Cycling Proficiency
Well done to those in sports matches last week and Year 6 for their cycling proficiency. It has definitely been a case of dodging the showers during this unusually cold spell for the time of year. I am so pleased that their attitude has been terrific throughout and the camaraderie amongst the children is heart-warming. My understanding is that summer may be on the way next week … and it is!

Gold with distinction for our Unicorn Singers … and more!

I would like to formally thank all the children in Year 6, their parents and the staff who teach them. …

The week before half term we were inundated with birds during our Arts and Culture Week; Birds of every description …

Unicorn School raises an amazing £1,646 for the Australian Red Cross

On Monday we held our own Unicorn Australia Day, raising money for the Australian Red Cross in aid of the …